This is one awesome speech. Check it out.

Don’t miss the face behind Sanders. I thought it was an oil painting. It never moved or blinked.  Then it did move. But it never blinks! 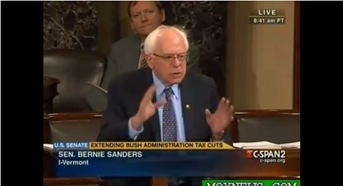 Senator Bernie Sanders is an American hero, standing up for the backbone of this country the middle class. President Obama on the other hand appears to be a Republican Trojan Horse.


Oh that was good.
Took so long to get to this point because everyone was so complacent. Why does it take near collapse before someone gets pissed? It is the taxes from us poor suckers that have created the top 1%ʻs wealth and it is being squandered.

The focus should be more on the fact that it is NOT whether of not someone gets tax breaks, etc.....the fact of focus is theft of public trust money, abuse of power and office in handling their fiduciary responsibilities to the tax payer.
They have all been relatively silent either through ignorance or not caring enough until it hit home with a family member.
That is complicity.
Although I appreciate Bernie Sanders speech, it is a little late.


Bernie Sanders as a member of the House and now a member of the Senate has been making these types of speeches for years. The problem is corporate media catering to the right never has time for the progressive view point especially when liberals talk about the Sherman-AntiTrust Act. The corporate media which most of us get our news from is scared one of these days they will be forced to give up their monopolistic grip on the news.


Bernie Sanders is currently filibustering on the Senate Floor to stop the Senate Republican and President Obama tax bill.