What can be more anti-democratic than representatives choosing their constituents?

The main business for candidates or incumbents in an election is, well, to get elected. That souls are sold wholesale to corporations in exchange for the wherewithal to do that is a given in our system of democracy.

But the fundamental right of Americans to choose their elected representatives is still the bedrock of our system. Would you believe that it isn’t quite as simple as that? Yes, through redistricting, which is about to take place, our representatives choose who can vote for them.

The Census gives us information that is supposed to guide redistricting. This may work if the process is carried out by impartial and non-partisan teams. In the absence of these impartial teams, the ability to lock themselves into power is a privilege of the party that rules a state when the opportunity to draw new boundaries comes up. This has resulted in some very peculiar redistricting maps, in Hawaii and in the rest of the country. 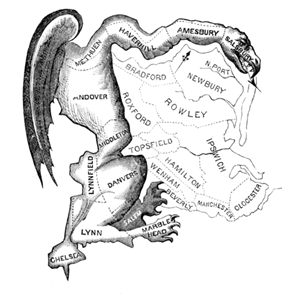 The term “gerrymandering” is well-known, and derives from the shape of a Massachusetts state senate election district under then governor Elbridge Gerry. In a historic drawing it was depicted as a shape resembling a salamander.

Other districts might resemble a Rorschach test blob after politicians absurdly re-craft the boundaries in order to perpetuate their own careers.

As a result of gains in mid-term elections, Republicans now control much of the electoral map. In many cases, they will soon have the power to redraw it.

Overwhelming victories in statehouses and governors' races across the country this week have placed the GOP in command of redrawing both congressional and legislative districts to conform with Census results. It's a grueling and politically charged process that typically gives the party in power an inherent advantage for a decade, allowing them to preserve current strongholds or to put others in play.   [AP, Besides seats, GOP wins sway in 2010 redistricting, 11/7/2010]

Republicans did well in last week’s elections, and will be licking their chops at the opportunity to draw district boundaries designed to nail down their rule on into the future:

… Of those 18 states that will apparently be forced to redraw maps, Republicans will now control governorships in 13 of them, with election gains this week in Florida, Iowa, Michigan, Ohio and Pennsylvania.

Similarly, the GOP will control both chambers in 10 of those 18 states' legislatures. Three others are divided or yet to be decided.

Of course, states where Democrats are in control will be doing the same.

Hawaii is no stranger to the controversies around this process. Those who want to learn more might start with a classic case, Burns v. Richardson 384 U.S. 73 (1966) which centered on the constitutionality of a reapportionment. The Hawaii State Constitution (1978) now has provisions designed to preserve basic island boundaries and “communities of interest.”

Citizens should be concerned about reapportionment. What is more anti-democratic than allowing elected officials to choose voters?