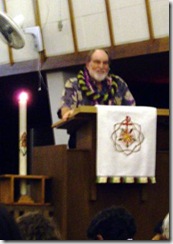 I attended this evening’s interfaith Thanksgiving celebration at Harris Methodist Church just as a participant. No notebook, no tape recorder. Oh, how I wish I had brought something just to record governor-elect Neil Abercrombie’s keynote address. I have not heard anything like it in Hawaii.

The service was truly inclusive, with about a dozen different faiths represented in a procession bringing symbols of their tradition to the front.

The theme “Many Voices, One World” was reiterated in song and readings throughout. It went smoothly. The music and voices perfectly reflected the interfaith nature of the gathering.

I can’t do Abercrombie’s speech justice from memory. Imagine something the opposite of Lingle/Palin. I learned that he reads Thomas Merton in some spare moments at his office. He name-dropped theologian Paul Tillich and spoke at length about the life and work of Dietrich Bonhoeffer. Each of these men were more than theologians, check the links.

At the start of his speech, Abercrombie was vulnerable and humble in describing his new position and the challenges of leadership ahead. By the end of the speech, he was inspired, inspiring and formidable. I have not heard a better crafted speech in some time. Certainly, none of the noise that emanates from Washington DC these days is a match for Neil Abercrombie when he is in top form, as he was this evening.

This will have to do for now, with apologies to readers for the lack of quotations.

"The service was truly inclusive". This explains Abercrombie's victory. Any questions?


I saw him speak at an energy convention. He read a letter on need for energy research, advancement, departure from oil. Then at the end, he said....you know that letter was from 1979, proving my commitment to energy.

95% of the room got it....after 30 years in Washington, he has done nothing about energy. This is a career politician. We are screwed.


Why do you folks require approval for comments? Kind of weird for this type of blog


Several reasons for moderating comments. For example, there is plenty of spam, things like "Great article!" and then a URL, often to some scam. Another: there are insults, attacks, and other comments without much value. There are the trolls who use comments simply to attack. There are those that are ads for something.

Unfortunately 95% percent of you over estimate the power of one House member to change the energy policy of this country.