#Justasking – why no Hawaiian language ballots or election materials in Hawaii? 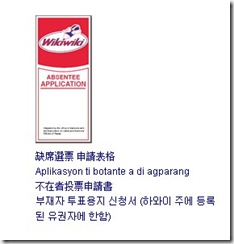 Hawaiian and English are the two official languages of the State of Hawaii.

So why isn’t there voting information in Hawaiian? Why no Hawaiian language ballots?

How come all those other languages on the Office of Elections web page, but no Hawaiian?

We talk about “honoring the host culture” which is a pretty degrading expression to begin with, and then we forget about Hawaiians when convenient.

If I have my say about the Honolulu rail transit system, it will have a Hawaiian name and Hawaiian will be the second language on signs. The most likely choice is "O'ahu Ka'ahi," Oahu Railway.

Also, messages will carry Hawaiian as a second language, although the entire system will depend as much as possible on symbols. The way to encourage young people to learn Hawaiian is to make sure they see and hear a lot of it. People who fear this would portend some Hawaiian "takeover" don't know that both languages smoothly co-existed during the first decades after annexation.


They don't provide a Tagalog ballot I don't think (I coulc be wrong). They do provide one in Ilocano.

But of course I understand why they provide election materials in different languages. Also, I have met several people whose first language is Hawaiian though they do speak English. I was just poking around the government website and noticing how neglected Hawaii's second language is.


I have lobbied for the printing of election materials in Hawaiian but have been told that it is not done due to expense.


This omission is also regularly made by the both clerks of the legislative bodies. Article 17, section 3, of the State Constitution requires proposed constitutional amendments to be "published once in each of four successive weeks in at least one newspaper of general circulation." A link to what it appears will be published over their names on 10/10, 10/17, 10/24, and 10/31 is shown on the Legislature's home page. The home page indicates that the publication will be in English, Japanese, Chinese, and "Filipino" (would that be Ilocano, Tagalog, Visayan, what?), but no Hawaiian.


There's a legal notice on the Constitutional amendment in this morning's paper, in the usual languages but not in Hawaiian.


Aloha Larry,
Mahalo for your question. I agree with what you say. How can Hawaiian be an official language, and NOT be on ballots and other legal documents. Its an unfortunate thing. As i stated above to Ken, the main goal of learning and teaching Hawaiian Language is to use it. Not to revert back to English because weʻve learned Hawaiian as a "second language".. What about the children who are learning Hawaiian as a FIRST language? I have many friends who only speak Hawaiian to their children. Most Immersion students learn Hawaiian, not as a second language, but as a living evolving language they use at home, school, and with friends. How can the "State" of Hawaiʻi print documents in other languages and neglect the growing population of Hawaiian language speakers. Its an issue that should be resolved, and many of us are fighting for these rights, and we need more support.