One after another, parents faced the judge today and were sentenced for their sit in at the Governor’s office. Depending on whether they accepted a plea deal, and according to the number of citations each was issued by the sheriffs, fines of $75 or community service for 15, 30 or 60 hours became their penalty.

I’m going to punt over to KITV. Keoki Kerr was there with their camera. He’ll be able to do a much better job with the story than I can. I might have something more later, but for the moment, check out the 10 p.m. news or their website for the report.

As you will recall, the Save Our Schools parents group was trying to meet and speak with the governor about ending the Furlough Fridays that so damaged children’s education last year. But the gov hardened her heart against them and never came out of her office. Not even once, not even for a minute.

So now the parents will pay for their activism. Some will have permanent records because of their conviction for trespassing. I make no secret that I blame the governor.  All she had to do was talk to the parents, and she wouldn’t even do that. 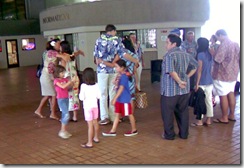 Before the sentencing, parents were greeted by Board of Education member Kim Coco Iwamoto as they gathered outside the courthouse.

After all the cases were processed I rushed over to federal court for Mordechai Orian’s appeal to yesterday’s detainment order. That’s the human trafficking case.

More later on that.

quite a day. Thankful Disappeared News is with us.


Thanks. Sorry for the short article. I saw the KITV 6-o'clock news. The top story was the sentencing. The video was so close, it was better than sitting in the audience in the courtroom. Of course, there is no time for discussing the meaning of the sit-in or how parents are still organizing, etc.


This is outrageous. Things like this, this is not what our courts are for!

Iʻm sorry but maybe some of these parents had to have their eyes opened by force.

Hopefully the ones that could not see before and believed Lingle would do them right...hopefully they can see now.

And not one single one of them should have ever accepted a plea.


Shame on Lingle and her ILK.....where was Aiona in all of this? Silent. So the Christian fundamentalists think that this man will be able to handle education in our state? I don't think so, no thinking person should be able to say that Aiona can or will with a straight face on.....it is humiliating to see these types of leaders not be able to rise up in an emergency and show leadership - Aiona commercials speak of the "wave".....I see his power in puddles of mis-steps......apart from the sit-in by parents - remember how he 'handled' the bridge closure over the H-1, when the military vehicle hit the overpass. I recall that I got home at 2 am. that "day", having left at 8 pm to try to get to Waimalu. AIona was Governor in waiting that day - as Linda was off-island.


As to Aiona, I think Lingle is his boss, and he probably couldn't really interfere. It would have been great to see him do that, but it's probably not something he would do. It was also her waiting room. He's at the opposite end of the building.


Shame on Lingle and her ILK.....where was Aiona in all of this? Silent.


Again, it was his boss's waiting room. I feel funny defending Aiona, and also wish he had spoken out, but maybe it's too much to expect under the circumstances.

Did anyone catch Kioni Kerr's comment at the end of his KITV news spot that the parents got more community service than someone who is convicted of drunk driving?