I remain ambivalent about renewing our Star-Advertiser subscription when it comes due. There is a lot to like when compared with the Advertiser it chewed up and spit out—a better selection of both national and international news, better food coverage, and lots more. Still…

For some reason, the old Star-Bulletin—with a similar layout (giant pictures instead of articles, open space) and political bent—just didn’t succeed. I don’t claim to know why, but I have my theories.

Check this out on today’s front page: 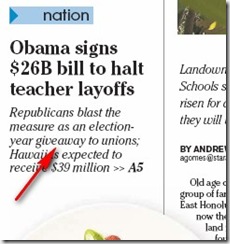 What Obama signed was a jobs bill that brought states badly needed money for police and firefighters, for example, besides schools. Of course, money for schools is money for kids’ education. There’s also some assistance for states’ Medicaid shortfalls.

That Republicans blasted it is not news. They also forced a compromise in which food stamps will be cut to help pay for the assistance. That’s how much Republicans care for ordinary people.

How do the ordinary people feel? Sixty percent supported the legislation, according to a CNN/Opinion Research survey. Probably, we little people like having better schools, cops, and other municipal services. When you call the police, you want them to show up. In some places the influx of money will make that possible, even if our newspaper doesn’t get it. The bill does more. It even has a bit in it to try to halt outsourcing of American jobs.

The Star-Advertiser chose to editorialize on its front page. There are many opinions on the bill which they cherry-picked to take a shot at unions.

Is the teaser factually incorrect? No, in many states the money might halt teacher layoffs. In some it won’t be enough. The part about “unions” though, is pure editorial.

But you haven’t seen anything yet. Turn to the editorial section, where editorials are supposed to be. The editors love to run Cal Thomas. Check out his bigoted column today. As you read it, remember that by selecting his column, the editors show that they support his views. The editors control what sees print in their paper.

They ran an op-ed a couple of months ago blasting the extension of unemployment insurance benefits because, according to the writer, people collecting benefits prefer it to going out and getting a job. Nevermind that it’s widely acknowledged that there are way too few jobs out there in total. In other words, everyone can’t be accommodated. We’re in a depression, folks, and jobs are being lost, not gained. The outlook is that more jobs will be cut. We haven’t hit bottom yet.

Yet, the Star-Advertiser editors liked that angle enough to give it lots of space.

People select which blogs and online news sources they read. They select whether they watch Fox on cable or MSNBC or Comedy Central. They also select what they read in print, I believe, though we don’t have any alternative in Honolulu.

Still, do I want my subscription money to pay for Cal Thomas?

Maybe political bias is why the Star-Bulletin failed (and remember, it did fail). Maybe the strange layout. Who knows. It would be sad for Hawaii if the Star-Advertiser should follow the Star-Bulletin’s well-beaten path to the bottom. I’m hoping that won’t happen.

Hmmm… here’s a thought: how about two editions. On your subscription form, check off Right or Left. Or Progressive or Conservative. Whatever. Then my doorstep wouldn’t be darkened by stuff I don’t want to read or pay for. I give this idea away freely. If it saves the newspaper industry, great!

I vote for progressive....I can't figure why republicans hate their fellow human beings..Yes, the Star-Advertiser doesn't meet the communities needs, so no subscription from me.


How dare they report what Republicans are saying!


yeah, really, since repub's are saying what's against the people's interest to keep and increase riches for themselves. at least give another view or two. but no.


I must disagree with your rant here. While the Star-Advertiser may showcase some extremely right-leaning contributors, overall there are many more leftward leaning contributing authors. Which is in line with this state. So I would say they are a more liberal newspaper than you make them out to be. Read Mid-Week, that is quite liberal with their articles and comics. Same publisher as the Star-Advertiser.
But I do appreciate that someone is criticizing the newspaper for its bias, but I just think that it goes the opposite way.