Replaced by an App—Back to the “future”

Timesharing computers were once the “wave of the future.” Everyone was going to have one of those teletypes in their office, and the world was going to be transformed.  Actually, much of that happened. It was going gangbusters until IBM put that little box on everyone’s desk. The one with the picture tube on top. When it started up it said “IBM” in those crummy blue letters they still use today as their logo. It was slow and less capable than timesharing. For awhile. The rest is history.

Timesharing was like “cloud computing.” It was accessed with a dumb terminal. Everything was stored someplace “out there.” Strangely, we’re headed once again to that same “wave of the future” they say, where everything is stored out there and all you need is a cheap, yes, dumb, little netbook terminal. Or maybe with an iPhone. And an app or two.

Well, it took long enough for someone to replace me with an app, anyway.

I used to do that. When I worked at GE’s Large Lamp Division in New York City as a college summer job, it was one of the things I did. Either on the phone or if someone sent a photo, we recommended what light bulbs to buy out of GE’s huge selection. Mostly, a light bulb cost 25-50 cents in those days, but we would still give out free advice.

Now I’ve been replaced.  By an iPhone app. You point it at your room and it gives advice on how to light it. 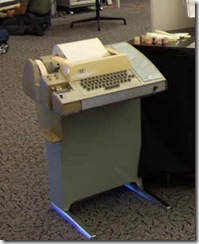 Speaking of apps, I used to write them. At the GE office there was a teletype model 33 along one blank wall. There wasn’t even a chair in front of it, and it never clicked or clacked. One day I asked about it and was told that it was hooked to GE’s Time Sharing service. Curious, I learned more, and tried it with someone’s user number. They gave it to me because they weren’t using it for anything. The service wasn’t commercial yet. It was only being tested in various GE offices around town. Each teletype had a private line in to the computer in the GE building, A GE 235 with a Datanet-30 front-end and a DSU-204 disk drive was attached.The disk platters were the size of coffee tables.

No one in the GE Large Lamp office knew what the TTY was good for, so no one was using it. 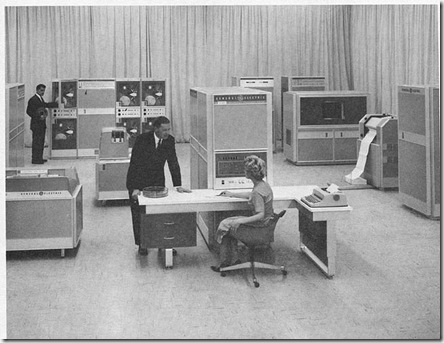 [GE 235 typical installation. GE could never make money selling computers. In 1970 it sold the division to Honeywell, but kept the timesharing. There was a joke at the time, which I found still on the web: “GE executives had a big meeting to decide how to become number two in the computer business (this was in the days when it was "IBM and the seven dwarfs"). The solution they came up with: buy IBM and manage it for 6 months. “ ]

Ok, so I sat down at the TTY and tried it. Pretty quickly I got good at the BASIC programming language which was all it could do at the time. Remember, there were no personal computers back then. Even a Xerox copier was a huge machine and not every office had one. We’re talking pre-history here, but state-of-the-art pre-history.

So I wrote a program. I called it MINNIE—the name had to be six characters or less. And yeah, all upper case, that’s all the TTY keyboard had. MINNIE was short for “Minimum cost of group relamping.”  If you’re still with me at all, I’ll explain quickly.

In office buildings or factories it was typical that when a fluorescent light burned out in the ceiling, someone would call maintenance and a guy with a ladder would come around and change the fluorescent tube. Every day in a large building a couple of calls would come into fix the flickering lights or change one that had burned out.

Economically it paid to change them all at some point to avoid the labor cost of having maintenance workers constantly running around the building. But how often to do that?

There were methods to figure it out. The idea was also to clean all the fixtures at the same time as all the lights were replaced. That saves a separate cleaning operation and keeps things bright. A real win-win situation (also for GE, of course), if only one could figure out the best interval to do the group relamping.

Enter MINNIE. Turn on the TTY and one was instantly connected to a powerful (for those days) computer. Call up the program. It would ask for a few numbers and almost immediately spew out the answer. For example, change ‘em all in 2 years 3 months. One could even try a different type of fluorescent tube and see if it made a difference. The cost was also displayed because labor costs had been punched in. I think it printed a range of intervals and costs and flagged the cheapest one.

The report, produced in a minute or two (TTY33s were slow, 10 char/sec) was worth big bucks to a building manager or maintenance engineer.

Suddenly the TTY got a lot of use. And GE sold a lot more fluorescent tubes. I wrote another program, ANGELA. I can’t remember what she it did.

For that, I got a computer terminal in my living room after the summer job was over, with unrestricted use, probably one of only two or three people in the city who had one in a home. And a plum job at GE when I graduated. I stayed with them for more than 20 years as it turned out.

Along the way, more powerful machines were put into service at GE that handled first 200 and later more than 600 users at one time. Please note that there were no viruses. The system architecture did not allow rogue programs to read or write anywhere in memory or disk. That technology was firmly established in the late 1970s, but not picked up by Microsoft. And so we lose productivity today guarding our little machines to be sure some kid in Korea doesn’t get our data or erase our hard drive. It doesn’t have to be this way. We proved it back then.

I used to do valuable things for GE and their customers. Now it seems there’s an app for all that.

Thank you for sharing this memory...I used to be a teletype operator full time and I loved the job. I was one of the last ones to work on a paper tape terminal (a green GTE Terminet from the late 60s - early 70s) during the early 80s for a government office. It got me in the door for office work which I do to this day. Since I am now in my 60s very few people in the workforce with me have ever seen one in operation or even realize people like myself who once used one are still in the workforce. Boy oh boy though I don't miss the paper chad that was cut from the tapes...one prankster in my office when I went on a break dumped the chad in my purse...it took me hours to get all the chad out with a tweezer!!! lol