Pictured below, del Castillo takes the prescribed oath standing next to his wife Lea. 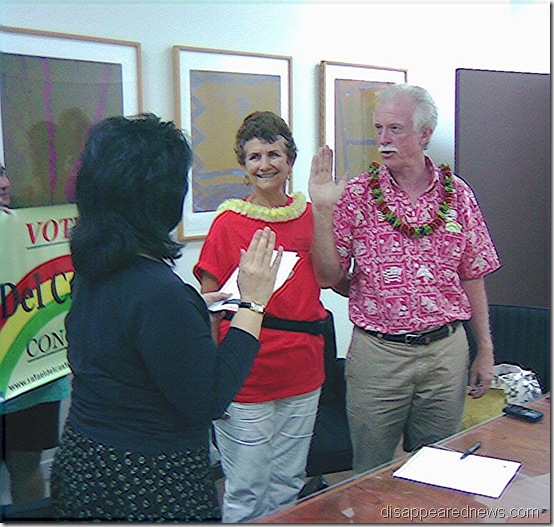 You’re not going to see this in your morning newspaper I’ll bet. Disappeared News went down to the elections office in Pearl City to document his filing to run in the Democratic primary for the 1st Congressional District.

In a nutshell, the office staff first checks the names, addresses and signatures on the nomination petition against their file. It’s common for a few to be disqualified because they moved since the last election or for some technicality, so candidates bring more signatures than the required 25. All are checked.

Next is payment of the filing fee, completion of several pages of paperwork, and finally taking an oath.

Del Castillo came in fourth in the runoff election behind Djou, Hanabusa and Case, in a crowded field of 14 applicants. That was despite the deliberate deletion by the Advertiser of anything and everything he said during the debates prior to voting. It’s a sad commentary on our local media that if a candidate is not willing to spend big bucks on ads, editors use the eraser end of their pencils instead of the point.

Thanks to a front-page article in the Honolulu Weekly the Honolulu public did see his image in newspaper boxes across town.