Next aid ship to leave Athens for Gaza on Saturday

A ship commissioned by a charity chaired by the son of Libyan leader Col Muammar Gadafy is poised to set sail for Gaza from a port southeast of Athens.

The Gadafy International Charity and Development Association announced that the Moldovan-flagged vessel, dubbed Hope , is loaded with 2,000 tonnes of humanitarian aid, made up of food and medical supplies.

Fifteen activists will also be on board to express solidarity with the Palestinian people, who are contending with the siege and blockade Israel has imposed on Gaza.

The organisation is headed by Saif al-Islam Gadafy, who is widely seen as his father’s heir.  [Irish Times, Son of Gadafy behind Gaza aid ship, 7/10/2010]

I’m not sure if many readers know that just less than two years ago a boat made it to Gaza through the Israeli blockade. 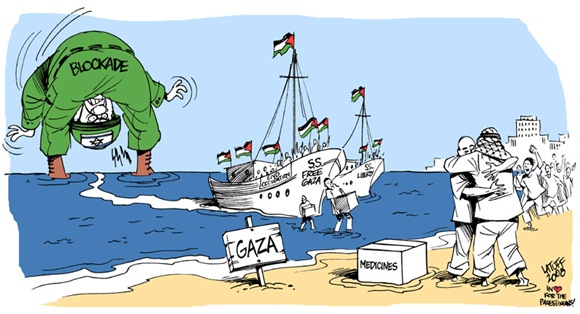 Thousands of Palestinians turned out in Gaza Aug. 24 [2008] to welcome two boats carrying members of the Free Gaza Movement (FGM), who had sailed there from Cyprus to break the Israeli blockade. As the boats approached Gaza’s beach, they released 5000 balloons with the colors of the Palestinian flag.

"It was really amazing—there were kids swimming out and boats sailing out to meet us," said Jeff Halper, head of the Israeli Committee Against House Demolitions. "It took us a day and a half to get here, and most of the activists got seasick, but the people here were so happy when we arrived."
…
Palestinian journalists who set out to meet the boats said they were forced to turn back after the Israeli navy had fired warning shots at them. While still far from the shore, and in choppy waters, the boats’ communication and navigation systems were jammed.   [Socialist Action, Palestine Activists in Boats Break Israeli Blockade of Gaza, 9/2008]

Does jammed communications sound familiar? In 2008 they got through, though.

The expectation of an attack had been reinforced by the memory of how Israel stopped an attempt by the PLO in 1988 to carry out a similar symbolic voyage carrying 100 Palestinian refugees to Haifa. A hole was blown in the boat by an Israeli mine. The day before, Israel used a car bomb to assassinate three PLO officials who they believed were the organizers of the planned boat trip.

But Israel did not attack, claiming that they wished to deny the FGM a propaganda victory. Clearly, however, attention given to the boats around the world was making an Israeli attack difficult (this didn’t include the U.S. media, which has largely ignored the events).

Please read the article in its entirety. It gives a picture of the sad conditions imposed on the Gazans by Israel even then. We cannot imagine what Gaza is like two years and one massacre later.