The Wikileaks data file is too large to fit in my spreadsheet program (OpenOffice Calc does the best job, but still won’t load the whole file).

Yes, Wikileaks has released Obama’s next headache in the form of a series of data files, including helpful interactive map data, based on secret reports dating between 2004 and December 2009. Their message accompanying the release indicated that there is more to come:

We have delayed the release of some 15,000 reports from the total archive as part of a harm minimization process demanded by our source. After further review, these reports will be released, with occasional redactions, and eventually, in full, as the security situation in Afghanistan permits.   [Wikileaks, Afghan War Diary, 2004-2010, 7/25/2010]

You can download your own copy from that page. If it doesn’t work at first, it may succeed after repeated tries.

The Guardian newspaper has put together a web page that begins to draw conclusions from the data:

No doubt there will be world reaction to several of these issues, especially the revelation of the death toll on innocent civilians.

The New York Times AtWar blog is following the release here. An additional story is here.

As they say, “The Spin Begins.” In following this issue, Google may be your best resource. News coverage is bound to explode. Also, Wikileaks home page carries links to some news stories, and you can follow their Twitter feed. 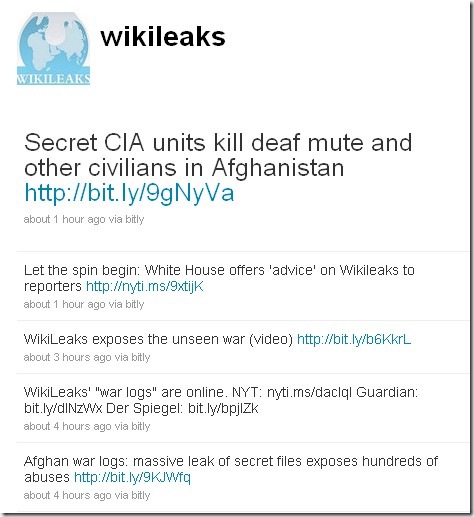 It’s not necessary to be a Twitter user to read their tweets. Just click on the image or the link above.

This article analyzes the data for deaths and includes a handy list of military acronyms and abbreviations at the end: