CNN appears to have forced out Octavia Nasr, their Senior Editor of Mideast Affairs, over a tweet. She has been with CNN for 20 years.

What got them riled up was this:

Later Nasr noted that her admiration for Fadlallah was based on his “contrarian and pioneering stand among Shia clerics on woman’s rights.” That context obviously wouldn’t have fit in 140 characters.

Her dismissal (see CNN internal memo obtained by Mediaite) raises questions of whether journalists may express their own opinions, whether US media are themselves biased (would someone have been fired by CNN for expressing admiration for an Israeli leader?), and whether Nasr’s tweet is a fair indication of on-air bias.

It appears that expressing a personal view with inadequate context can be costly.

The Tweetosphere has reacted, though, and not much of the comment has been favorable to CNN. 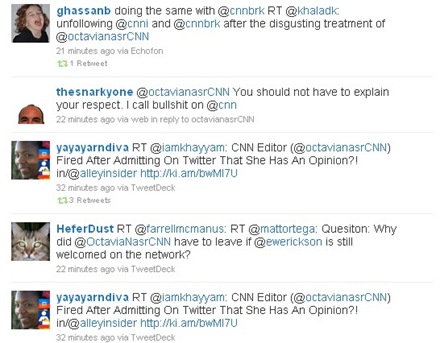 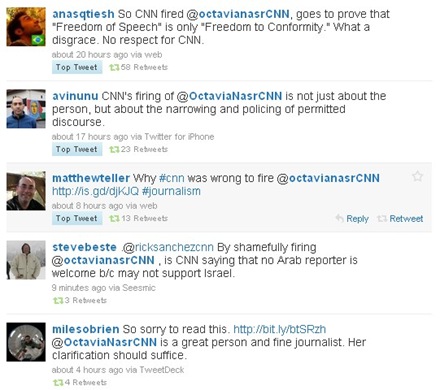 Perhaps, if Twitter matters, Nasr should have been more careful with her tweet. On the other hand, since Twitter matters, CNN is the big loser in this. They’ve lost the tweet war already, and it is still raging with new tweets weighing in every second as the news spreads round the world, 140 characters at a time.

…More importantly, plenty of American journalists and politicians have shown "respect" (and in some cases, fawning admiration) for various world figures with hands far bloodier than Ayatollah Fadlallah -- including Mao Zedong, Ariel Sharon, the Shah of Iran, or even Kim il Sung -- but it didn't cost them their jobs. And let's not forget that plenty of American journalists treat our own leaders with plenty of deference and "respect," even after the latter have launched unnecessary wars in which tens of thousands have died or authorized the torture of detainees. And as Josh Marshall notes over at TPM, getting fired after a successful twenty-year career over a 140-character tweet "just doesn't seem right."

What exactly is it about the opinion Nasr expressed that makes it worth firing her over?  Well, Fadlallah was a “mentor to” Hezbollah, an organization that the United States considers a terrorist group.  Mind you, halfway around the world, that’s not remotely how Hezbollah is viewed; like it or not, in Lebanon, Hezbollah is a legitimate political party and organization.  And Fadlallah a respected figure, honored even in Western (and Israeli!) media.

The article has been transformed into a bilingual discussion over at Meedan. You can join in (discussion is free over there, and widely read).

I recall not too long ago, non- Op Ed journalists being prohibited in most newsroom in the US having any opinion on anything. No bumper stickers, etc.,. I think the problem here is that it doesn't sleep like that line has been clearly drawn and enforced since the late 90s and naturally targeting a journalist targeted by the Israel lobby never looks good, in itself.