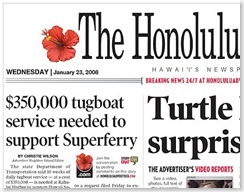 Today’s Star-Advertiser buried the AP story Superferry was in trouble early in its run (7/21/2010) as best it could. It ran on page B3, although in fairness it was pretty prominent once you got there. There was no teaser pointing to the story.

Try and find it on their web page. It’s there, down in the fine print.

The thrust of the AP story is that the Superferry was unable to fully pay the required fees to the state starting in July, 2008, and that the Lingle administration was aware of the company’s economic difficulties.

The “disappeared” news is that our media could have figured this out sooner. Bloggers ran through the simple calculations needed to demonstrate that the ferry company was almost certainly losing money. Hawaii Superferry had enough money to pay for web ads that appeared on newspaper sites, though.

A complete accounting of the state’s subsidies and losses incurred in supporting a money-losing operation is long overdue. Bits and pieces have appeared in news stories over the years. Perhaps the most recent expense (after the ferry company declared bankruptcy) was the $218,000 cost just to tow the state-owned barge to Oahu:

The state Department of Transportation's Harbors Division has awarded a $218,000 contract to Healy Tibbitts Builders Inc. to tow a state-owned barge, which had been used to load vehicles on and off the now-defunct interisland ferry, from Maui's Kahului Harbor to Honolulu.   [Honolulu Advertiser, Hawaii's tab for Superferry rises another $218,000, to tow barge, 3/4/2010]

The ferry company stopped paying insurance on the barge. If it is still covered, then the cost of the policy must be a state expense.

Some more fragments of the total bill appeared in the same Advertiser article:

The state already has spent nearly $3 million on repairs and improvements to the Kahului barge and mooring system. Healy Tibbitts, which designed and built the barge, was paid $414,000 last year for structural repairs.

In an article I wrote in January, 2008, I asked: $350,000 for tugs for the Superferry--where did that money come from? and contrasted Lingle’s willingness to pay corporate welfare for Hawaii Superferry while withholding grants-in-aid for badly needed social programs. I listed a few of those organizations that got cuts adding up to the same $350,000.

The state also paid for tug boat services at the rate of $1,000-$2,000 an hour (a Dept. of Transportation number). Since the tugboat stood by to assist, then held the state-owned barge against the dock during unloading and loading, the state might have been spending up to $6,000 each ferry trip when there was a swell.

Lingle’s legacy is tied up inextricably with the Superferry fiasco. The AP story reveals that she continued to back a business she knew was failing. The other part of her legacy will be her cuts to social services for Hawaii’s most vulnerable, including immoral cuts to dialysis and chemotherapy to Micronesians and others that made headlines and were later ruled illegal (as well as immoral). Her drastic cuts to adult mental health services are the subject of a recently filed complaint in state court.

Exactly!
The timings of the ʻmissingʻ funds, the budget shortfall and the furloughs are all DIRECTLY related to HSF criminal activity.
It is possible Hawaii may have slid through the recession without this much pain if we had had an honest governor.